"Thousand Boiling Water" The hazard you don't know. . . Is the drinking fountain in your house still boiling a thousand boiling water?

"Thousand-boiling water", as its name implies, is water that has been boiled repeatedly. The water we usually drink contains calcium, iron, zinc, magnesium, sodium and other mineral elements and trace organic phosphorus and other organic compounds as well as some filter preparations for disinfection.

The harm of "thousand boiling water" is more concealed, and the scope of endangerment is wider. So how does "thousand boiling water" arise? It turned out that the water originally contained a small amount of nitrate and nitrite. Nitrate is an ionic compound (which is an ionic crystal), and its ionic bonds are relatively stable. Therefore, nitrate is relatively stable, but because nitrate is composed of active non-metallic elements-N and O, nitrate is unstable, so the chemical nature of nitrate is very active. The alkali metal and Group IIA anhydrous nitrate can be decomposed into nitrite and oxygen under heating, such as: 2NaNO3 2NaNO2+O2↑.

Especially the water that boils overnight or for a long time on the fire, and the water that is boiled repeatedly in the electric water boiler. Due to boiling for too long and repeated heating, the content of heavy metal components such as calcium and magnesium and nitrite in water are very high. Nitrite is very harmful to the human body, it will destroy the body's blood's ability to transport oxygen, making the heart beat too fast and difficult to breathe. Moreover, nitrite is also a substance that is easy to cause cancer, and when a certain dose is reached in the human body, it will form a carcinogenic, teratogenic, and mutagenic substance that seriously harms human health. Similarly, excessive heavy metal ions are harmful to the human body.

So this kind of water is harmful to the human body. Drinking this water for a long time will interfere with the gastrointestinal function of the person, and there will be temporary diarrhea and bloating; toxic nitrite will also make the hemoglobin in the blood lose its oxygen carrying function, causing the body to lack oxygen, making the lips, nails and skin blue , Dizziness, headache, palpitation, chest tightness, nausea, vomiting, abdominal pain, diarrhea, severe coma and convulsions, and even death. The harm of nitrite is not only poisoning people, it also has carcinogenic effects. Nitrite can interact with secondary amines in food or stomach to produce amine nitrite, which can cause cancer.

So how to choose an energy-saving water dispenser without thousand boiling water to drink healthy water? Shanmuquan Company specially solves the problem of healthy drinking water for the general public, adopts a stepping heating system, instant constant current constant temperature patented technology, one-time heating, eliminates thousands of boiling water, eliminates yin and yang water and mixed water, automatic cleaning and descaling technology eliminates overnight water, The water can't be boiled, and the water can't be discharged. You can drink boiled water at any time. High-efficiency heat preservation technology and steam recovery device can save more than 60% energy. It can be shut down regularly at night to save power.

The above is the harm and solution of the thousand boiling water summarized by the editor today. If you have any questions, you can leave a message at any time. The next issue is more exciting, don't miss it! 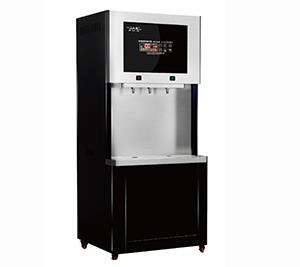 Previous: Do you dare to buy inferior campus drinking fountains?

下一条: The disease comes from the mouth, is your drinking water really healthy?